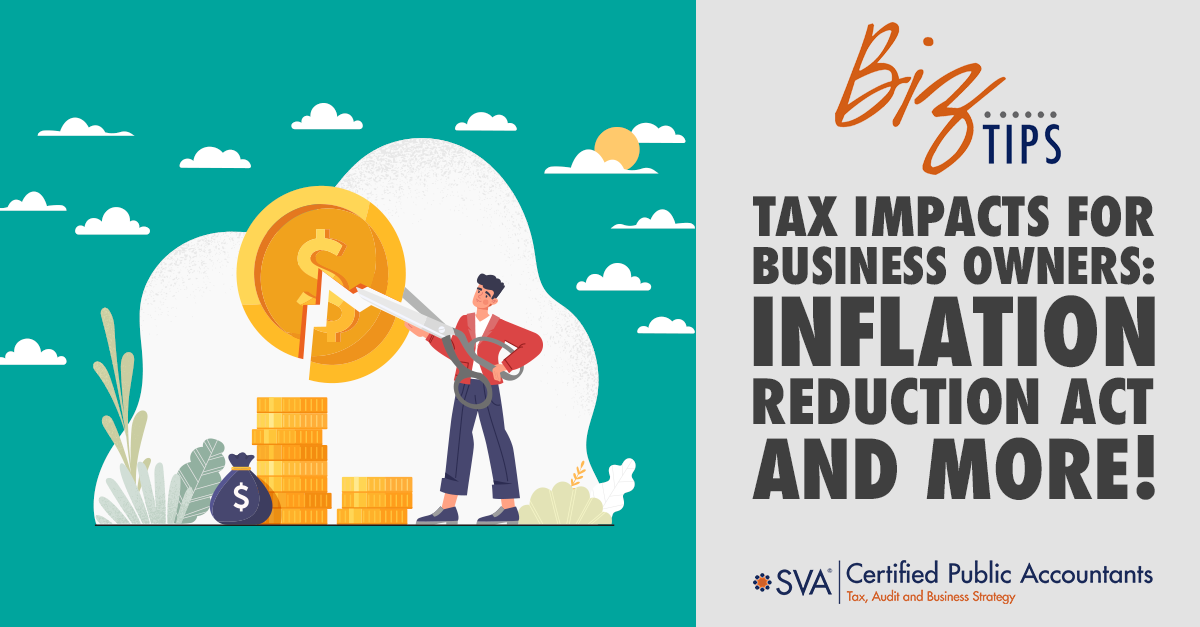 The Inflation Reduction Act (IRA) of 2022 is a slimmed-down version of the previously proposed Build Back Better bill. The new bill includes provisions specifically aimed at curbing the highest rates of inflation seen in recent decades, makes the largest investment in combating climate change in U.S. history, and raises taxes on corporations.

Here are the components of the IRA that will impact business owners, as well as a recap of expiring tax provisions, current rules, opportunities, and limitations.

Highlights of the Inflation Reduction Act

After months of negotiation, the Inflation Reduction Act was finally signed into law on August 16, 2022. Comparing Build Back Better with the recently passed IRA, there are a number of new items as well as elements that were in the original proposal that were ultimately excluded in the final version.

What is in the Bill?

There are only two tax increases, which are on large corporations, that were passed in the Inflation Reduction Act.

For those companies making over $1 billion, the IRA will impose a corporate alternative minimum tax of 15% of financial statement income (also known as book income, as opposed to tax income) reduced by, among other things, depreciation and net operating losses. The new minimum tax is effective for tax years beginning after December 31, 2022.

When publicly traded companies have excess funds, they sometimes repurchase their own shares to help support their stock price in the market. Prior to this law, there was no tax on this kind of buyback other than the tax shareholders would pay on any capital gains. The IRA will now impose a 1% excise tax on the fair market value when corporations buy back their stock. 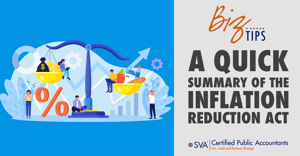 BIZ TIP: A Quick Summary of the Inflation Reduction Act

There were many tax provisions not included in the final bill that was signed into law.

These taxes on large corporations will raise some money, but how will the government raise enough to pay for the green energy provisions in the bill? By hiring more IRS agents, employing them to perform more audits, and collecting the money.

The IRA provides approximately $80 billion over 10 years to fund the IRS and improve its tax enforcement activities and technology. They plan to hire roughly 87,000 new employees, a lot of which will be auditors targeting those that make over $400,000.

The Congressional Budget Office estimates the infusion of funds will allow the IRS to collect $203 billion over the next decade from corporations and wealthy individuals. 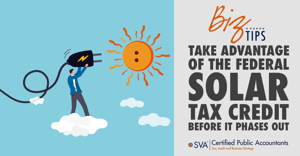 BIZ TIP: Take Advantage of the Federal Solar Tax Credit Before It Phases Out

One area of the Inflation Reduction Act where some will feel financial relief is in the healthcare provisions. Two items of significance are:

If your business hasn’t taken advantage of the Employee Retention Credit (ERC), now is the time to act! The ERC is a potentially significant credit for paying employees after you've had an impacted year from COVID.

Businesses can also qualify for the ERC by passing the government shutdown test. Even if you don't pass the previous two mechanical number tests, you can qualify if your business was impacted by a government-issued order that made you shut down or at least reduced your business in such a way that you had enough of a decline in a certain segment of business. If you meet this test, you don't need to calculate the percent decline in sales, you will automatically qualify for the credit. 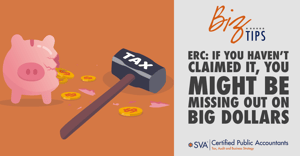 BIZ TIP: ERC: If You Haven't Claimed It, You Might Be Missing Out on Big Dollars

Section 179 allows a business to deduct (rather than depreciate over a number of years) the cost of purchasing eligible new or used assets (i.e., equipment, furniture, off-the-shelf computer software, and qualified improvement property).

For qualifying assets placed in service in 2022, the expensing limit is $1.08 million. Then it begins to phase out dollar for dollar when asset acquisitions for the year exceed $2.7 million. One key point to remember is that you can only claim the election to offset net income, not to reduce it below zero to create a net operating loss. 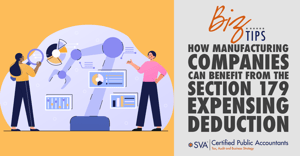 BIZ TIP: How Manufacturing Companies Can Benefit from the Section 179 Expensing Deduction

Similar to Section 179, bonus depreciation also allows a business to deduct the entire cost of an eligible new or used asset in the first year. However, there are two key distinctions between the two concepts:

2022 will be the last year a business can deduct 100% of the cost of an asset, so now is the time to purchase new equipment before year-end. Bonus depreciation will continue to exist after 2022, but it will begin to phase down 20% each year over the next four years. Starting in 2027, normal depreciation rules will apply.

Effectively this rule tries to curb the interest expense deduction for large companies, and it does so by only allowing a business to deduct as much interest as a multiple of its earnings. This rule only applies to large companies with gross receipts averaging over $27 million.

Why is this important now? Up to 2021, the earnings you reported in regard to this rule did not include depreciation expense. Beginning in 2022, a company can no longer include the benefit of an addback of depreciation and amortization expense.

Before electing out of the 163(j) limitation, consult with your tax advisor that your business qualifies for the election. In general, the election may be available to a real property development, redevelopment, construction, reconstruction, acquisition, conversion, rental, operation, management, leasing, or brokerage business.

Provisions had been put in place, which were suspended during the pandemic, that stated if you have business losses, you can't offset more than $250,000 ($500,000 for married filing joint) of income from a pass-through entity from other sources such as salary, self-employment income, interest, dividends, and capital gains.

The CARES Act temporarily lifted this limit, allowing taxpayers to deduct 100% of business losses arising in 2018, 2019, and 2020. But the limit returned in 2021, and the American Rescue Plan Act extends it through 2026.

A tax professional can help you plan effectively to take advantage of the credits and deductions available under the IRA and other federal laws. Now is a great time to start planning!