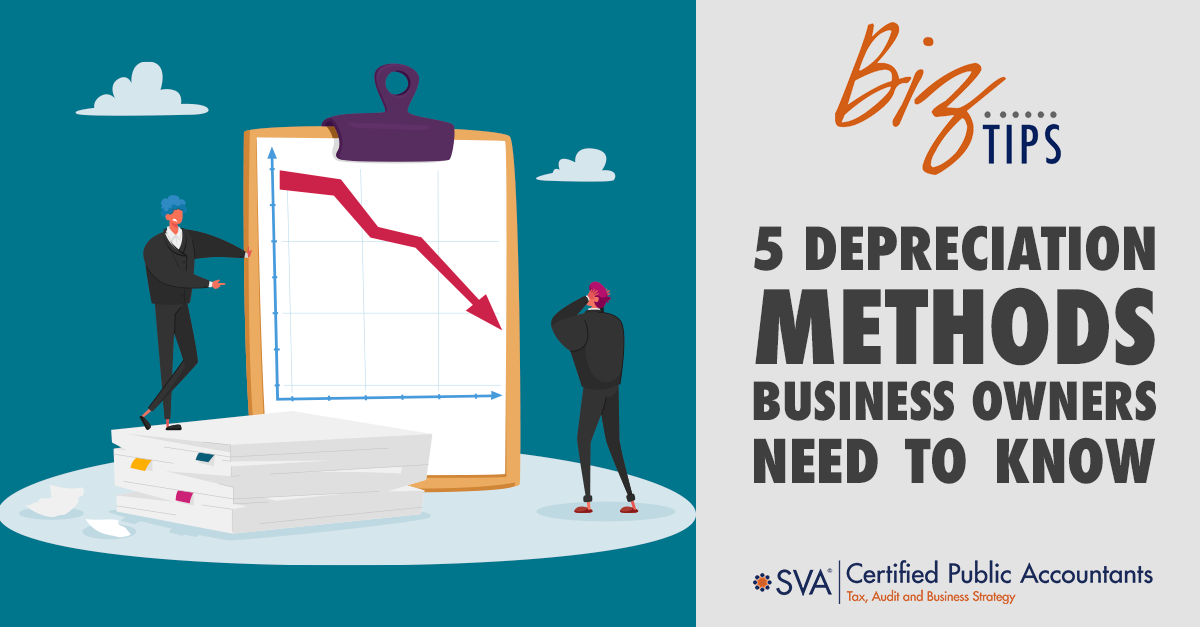 Depreciation of assets is an integral part of a company’s tax strategy which lowers the amount of earnings taxes are based on. This in turn reduces the amount of taxes owed.

Generally Accepted Accounting Principles (GAAP) give business owners the choice of 5 different methods of depreciation to use:

Each method calculates the rate of depreciation differently and some are better fits for different types of companies.

Some businesses choose one method for depreciating all their assets while some use two or more methods. The reason for using different methods could depend on the useful life of the asset or the company wanting larger deductions early.

Before we look at each method more closely, let’s review the terms used in the formulas and what they mean.

Original Cost of the Asset

This is the initial cost that was paid for the asset.

The estimated salvage price a business believes it would be able to get for the asset by selling it at the end of its useful life.

Useful Life of the Asset

The expected amount of time the asset will be of use to the company.

The net value of an asset at the beginning of an accounting period. This is calculated by taking the cost of the asset and subtracting the accumulated depreciation.

The rate (as a percentage) at which an asset is depreciated over its estimated lifespan. (Formula = 1/Useful Life of the Asset)

An estimate (in years) of an asset’s usefulness.

SYD (Sum of the Years' Digits)

Number of units an asset is expected to produce during its lifetime.

Number of units the asset produced during the current year.

This is the simplest and most used depreciation method. It is best for smaller businesses that are looking for a simple way to calculate depreciation.

With the straight line method, you are calculating a depreciation amount that is the same year after year for the life of the asset. This is what makes it the simplest method to use.

This method is best suited for companies that have assets that lose value faster in the early years. Technology (such as computers and cell phones) is an example of an asset that becomes obsolete quickly. The declining balance method provides larger deductions sooner, minimizing tax exposure. It is considered a type of accelerated depreciation.

As with the declining balance method, double declining is best suited for assets that tend to lose much of their value at the beginning of their useful life. Assets that may become obsolete quickly are another good fit for this method.

Another accelerated depreciation method, SYD results in larger depreciation amounts early in the life of an asset, but not as aggressively as declining balance. This method is geared towards assets that lose value quickly or produce at a higher capacity during the early years.

This depreciation method does not use time as a factor in calculating depreciation. It uses the number of units an asset actually produces and the estimate of how much it will produce over its lifetime.

Companies that produce or manufacture goods would find this method useful.

What Assets Cannot Be Depreciated?

There are some assets that business owners cannot depreciate. Here are a few examples:

Even though land is considered a fixed asset, it is never depreciated since its useful life is unlimited. Buildings and some land improvements may qualify for depreciation, but not the land itself.

These assets are not depreciable as it is assumed they will turn into cash in a short amount of time, usually within 1 year.

Assets that have little useful life and/or are low-cost are considered expenses, so not depreciable.

The Tax Cuts and Jobs Act (TCJA) raised the bonus depreciation deduction from 50% to 100%. It allows companies to deduct a large portion of the purchase price of the asset during the first year it is in service, instead of spreading the deductions out over the asset’s useful life like the methods above. If a company decides to take bonus depreciation, it must be during the first year of the asset’s life, or they can choose to use one of the depreciation methods above.

This percentage applies to assets acquired between 9/27/2017 and 1/1/2023. Here are the planned rates for upcoming years:

(These rates may change if Congress changes the law.) 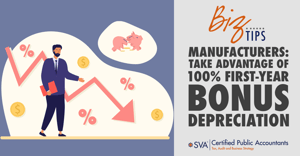 Which Method is Best for Your Company?

Deciding which depreciation method to use will depend on what your assets are used for and how you want to apply depreciation: slow and steady, start quickly, or based on units of production.

If you’re not sure which method is the best fit for your assets, get advice from an accounting professional. They will walk you through the differences and suggest which method(s) you should choose.