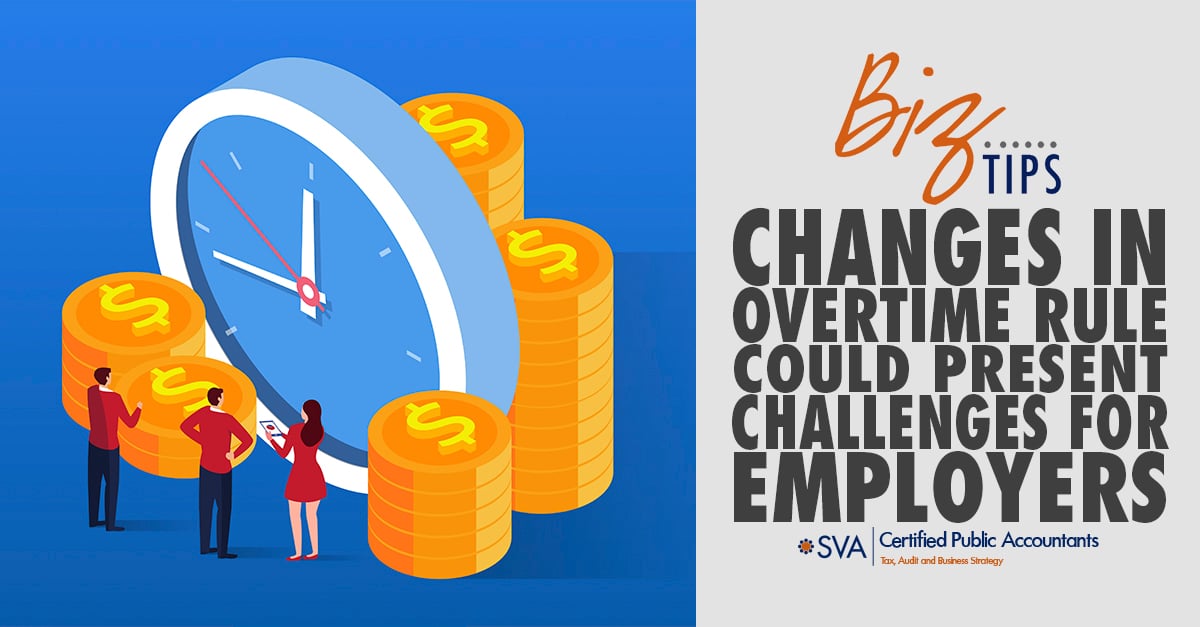 Changes in Overtime Rule Could Present Challenges for Employers

In 2019, the Department of Labor (DOL) issued final regulations related to the Fair Labor Standards Administration (FLSA) about the classification of employees who are entitled to overtime pay when they work hours in excess of 40 per week.

Effective January 1, 2020, millions of additional employees are eligible for overtime pay, making it critical for business owners to understand the changes.

Under previous regulations, certain employees are exempt from the FLSA rules, which require the payment of overtime to employees who work more than 40 hours in a workweek. To satisfy this exemption, the employee must be paid a minimum salary (the “salary level”) and perform certain types of duties that would be performed normally by executive, administrative or professional employees (the “duties”).

The salary level had not been adjusted since 2004, when it was set at $455 per week. The Trump administration is concerned that certain employees who are classified as exempt from overtime are working hours far in excess of 40 and are therefore earning far less than the minimum wage that would be paid to them if they were non-exempt, hourly employees.

The new regulation adjusts the salary level to $684 a week ($35,568 annually) and would be subject to annual revisions based on either changes in a salary survey or the Consumer Price Index. Employers can use non-discretionary bonuses and incentive payments (including commissions) paid at least annually to satisfy up to 10 percent of the standard salary level. The FLSA will update the salary level in the future.

There were no changes to the duties that determine an employee’s exempt vs non-exempt status.

The federal government estimates that this change will result in approximately 1.3 million more workers being subject to the overtime rules. Employers may not be pleased with the regulation.

Employers will need to implement these rules on January 1, 2020. This may result in the monitoring of hours for employees who have not had that requirement in the past.

We would be pleased to discuss issues related to compensation structures and the impact of the FLSA regulation.

Nicole is a Principal at SVA Certified Public Accountants working primarily with closely-held businesses and individual clients. Nicole performs a variety of tax, assurance and business consulting functions. She provides clients with technical expertise in areas such as tax planning, financial reporting, financial projections, budgeting, financial and estate planning and review of internal controls. Her experience in the hospitality, restaurant, construction and professional services industries gives her the ability to consult with clients in a variety of areas.